If you’re looking to be more productive then it’s helpful to understand exactly how multitasking affects your brain. According to a recent infographic by OnlineUniversities.com, your brain “wasn’t designed to handle the amount information it is currently processing.”

In an age where 695,000 Facebook status updates, 1,500 blog posts, and 168 million emails are sent every 60 seconds, it remains difficult to focus and keep from multitasking. It pays however to limit your tasks to a maximum two at a time. According to the infographic:

When the brain is faced with two tasks, the medial prefrontal cortex divides into so that each half can focus on one task. The anterior-most part of the frontal lobes enables the switch between two goals. When a third task comes into play, it’s too much for the brain to handle at once. Consequently, accuracy drops considerable.

Some more interesting stats from the infographic:

Here are some tips from the infographic that can help you combat stress and digital information overload:

Measure your time on a task to minimize your multitasking and reduce your stress:

This “Digital Stress and Your Brain” infographic, combined with the more scary side-effect of sitting down all day, caused me to think deeply about breaks. I’m often so involved in what I want to accomplish that day that I spend too much time hammering through tasks without getting up. I know I need to stand up, drink water, and recharge but often forget.

A small Jquery tool I created that anyone is free to try, take, or modify is a countdown timer in the browser. The timer counts down from 30 minutes and then pops up an alert window saying “times up!” The idea is to stand up, drink some water, and take a short break. You can modify the time to anything you want by changing the query string.

Click the image below to open the countdown timer. 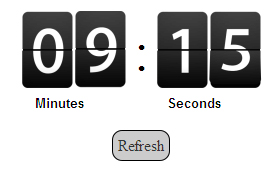 View the infographic below: