The following infographic showcases some recent and interesting findings on how corporations are tackling social media. Initially skeptical of its use for business purposes, it appears many have adopted the two-way communication mindset during this modern age of information and relationship building.

Below are some of the more interesting highlights from the infographic:

There are many factors to consider when you’re choosing the social media platform that is right for your brand or company profile. First off, you have to decide on the resources you’re willing to allocate every day, week, and month to maintaining the account. A state social media profile can sometimes do more harm than not having one at all. If you’re going to engage with prospects and customers, then first commit to keeping it up-to-date.

Below is a helpful infographic from Infographics.sg, a data visualization and design agency. This infographic outlines some of the major factors to consider when deciding where to showcase your content. It also dives into the demographics of each social media account and you can determine if that matches your customer profile.

Below is a Quick Summary of the Infographic:

It’s easy for technology start-ups and web service companies to understand the importance of communicating with customers through channels such as social media and mobile technology. They have it ingrained in their DNA. It’s more difficult for companies that have a long-standing culture of face to face or direct mail interaction, to adopt these methods.

It’s not that face to face interaction with customers is unimportant. I believe that it is still the single best method for building relationships and getting a true understanding of your customers’ needs. The problem is that it takes time and your customers aren’t always willing to give it. With a myriad of choices, customers opt for the quickest and most painless way of learning, providing feedback, complimenting, or complaining.

Avaya, a global provider of business collaboration and communications solutions, has created the infographic below titled “How Social Media and Mobile Technology Impact the Customer Experience.” This great research identifies and ranks the channels that consumers prefer when interacting with brands.

If you’re a business owner or brand marketer, it’s important to recognize that your customers have a preference to how they’d like to engage with you. Are you adopting the right channels?

Consistent branding across your website, print, video, website, and social media accounts is essential in a modern world where consumers are hit with countless advertisements in a single day. It becomes even more difficult when each of those medium’s creative require different sizes, color, software, time, and expertise to produce. Take just publishing your logo on different social media profiles for example. You have to design different creative at a wide variety of sizes for Facebook, Twitter, LinkedIn, YouTube, Pinterest, and Google+.

Original Ginger, a “Digital Agency located in the heart of historic Fort Langley, a hip and artistic suburb of Vancouver BC”, created an infographic that quickly communicates the image sizes of each of the popular social media companies. Use this to work with your agency or have your design team prepare your creative so that you can have one look and feel to your brand across them all.

A recent infographic by Mogreet, a leader in mobile video and MMS messaging, stacks up the usage and engagement of SMS & MMS mobile communication against social media’s top players Facebook, Twitter, Google+, and Pinterest. They separate the two into what they call Narrowcast and Broadcast.

Narrowcasting is the sharing of information directly to its intended recipient, thereby breaking through all of the clutter. Broadcasting is the mass public sharing, such as a post or tweet. The infographic supports that you’re not only more likely to reach your audience but they’ll be more apt to respond when you do it. This conclusion is drawn from some very interesting statistics.

What does this mean for marketers?

SMS and MMS are powerful marketing tactics that can get your message directly to your audience and more importantly, they’ll see it. What is the average click rate of your last email? It’s unlikely it was above 15%. If it was, you’re part of the lucky minority. How many people viewed your Facebook page? Yes, you can see that now.  Tweets go by even faster. How many of those get a mention or retweet? According to the infographic, 98% of all SMS and MMS messages are opened. That’s a remarkable percentage and clearly demonstrates how much this medium is valued.

Build a Personal Touch-point with Your Loyal Customers

Recently I was talking with the owner of a small family restaurant in my area. They were experimenting with SMS messaging. At first, it was slow going collecting their customer’s information but after a while of asking nicely, displaying signs, and not abusing those already in the program, they started to get a good base of numbers. The owner has had great success with using this channel in a number of ways. In fact, it has become their primary means of communication that trumps email, social, and traditional advertising.

Here shows how they are using SMS messaging.

Below is the infographic titled “Is Bigger Always Better?”

According to a recent infographic and article by online store platform Shopify.com…

Pinterest is now the 3rd most popular social network site in the world, and ecommerce stores can leverage its popularity to significantly increase traffic and sales.

How did they determine this? Shopify analyzed 25,000 of their stores to see where the referral traffic was coming from. What’s amazing is visitors from Pinterest  are 10% more likely to make a purchase over other major social media sites such as Facebook and Twitter. Also, the orders tend to be higher, almost double in fact, than Facebook referral orders.

How Marketers Use Social Media [Infographic]

It’s no surprise that advertising professionals are advocates of social media. We research, test, and execute marketing campaigns on a daily basis and they design these campaigns with the purpose of delivering a message to a targeted group of prospects. Social media not only allows for highly targeted messaging but it’s extremely scalable. The message can be sent and re-sent by the recipients. This inherently viral component, along with the ability to measure it, makes it very appealing for use.

This infographic by SF Heat provides some interesting insight into the difference.

As introduced to us by Business Insider, Buddy Media’s Social Enterprise Software is a suite of products is “designed to help brands build and maintain relationships with consumers to accelerate their business.”

Why do brands need help with this? Well, it’s complicated. 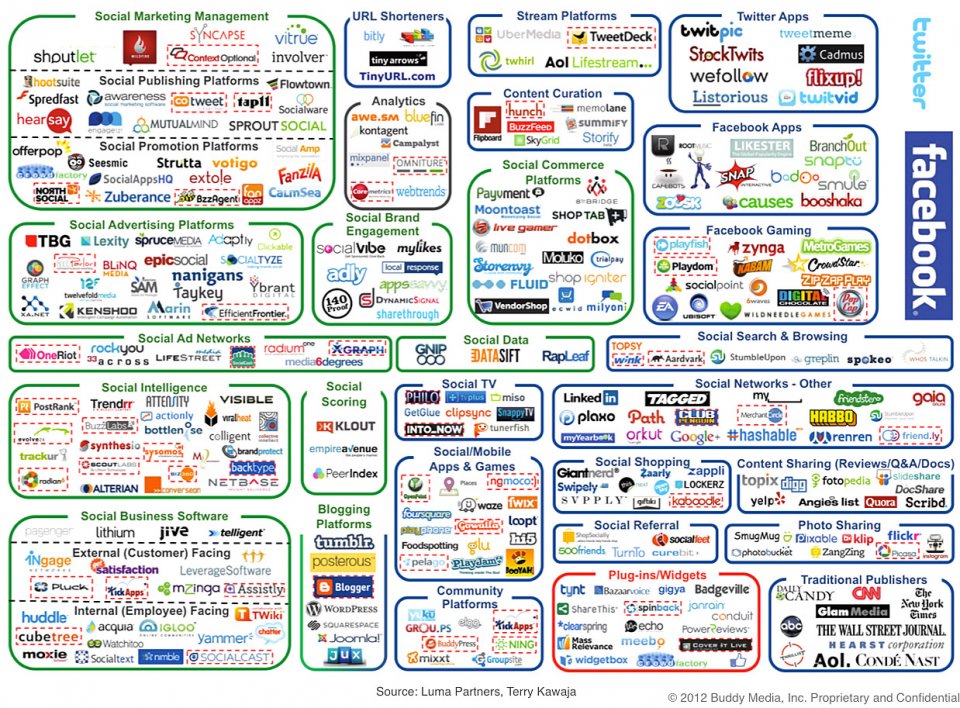 So what does this mean to companies and marketers who want to break into the social media space and start utilizing this industry without getting overwhelmed?

When I first joined Twitter, I didn’t know quite what I would get out of it. However, like all other social media I knew it was about building real relationships. For all relationships, in-person or otherwise, the connection should always be genuine and helpful.

Based on what I’ve learned, I believe that your Twitter strategy should be based on reciprocity of sharing others’ content first and then engaging them with interesting conversation.

Below are 10 Tips that can help make you a success on Twitter.

If you have any other tips to help make you a success on Twitter, please share in the comments.